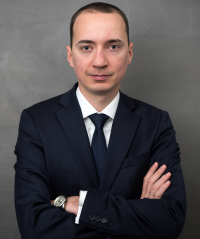 Dilyan Nachev has been working for several years as a lecturer at the Faculty of Law of the University of Sofia "St. Kliment Ohridski" and as a lawyer registered with the Sofia Bar.

In 2016, Dilyan Nachev defended a doctoral thesis on the abuse of rights ("Abuse of Rights/ Concept, Scope, Consequences /").

He worked as a legal advisor at the law firm "Ilieva, Voutcheva and Co", then in 2013 he became a lawyer at the Sofia Bar. Since then, Me. Dilyan Nachev has created his own law firm in Sofia.

Since 2013, Dilyan Nachev has also been a mediator, registered in the Unified Register of Mediators at the Ministry of Justice of Bulgaria.

Dilyan Nachev is fluent in French and English, and has a good knowledge of Russian. He is currently a member of the France-Bulgaria Chamber of Commerce and Industry.